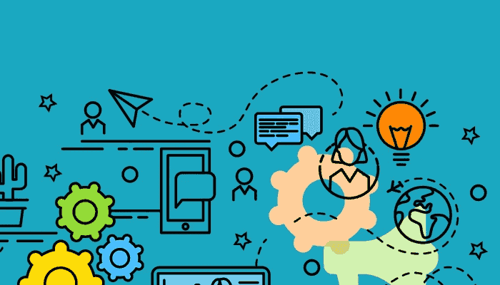 Today, projects that involve implementing cloud-based software are fast. Instead of a 1-2-year implementation, we are now able to complete the implementation with even more complex business processes in 6-12 weeks.

Because projects move quicker, this means that change needs to be faster. The project team must absorb change and adapt to their new way of doing work a lot faster. Traditional organizational change management simply does not allow for that.

What is Integrated OCM?

Change throughout an organization, a department, or even a single team is not easy, therefore; it is sometimes avoided. With this solution, changes are few and far between. It leaves organizations with legacy systems and processes that require large amounts of effort.

With INRY’s PASS Methodology, we ensure that your organization will be able to adapt, with ease, to changes that may occur. By leveraging change management techniques as part of our methodology, there is no longer a need to follow a separate OCM track or specialist.

PASS is a methodology, in which, all INRY’s projects follow. It is highly interactive, and user driven. PASS is very similar to an Agile approach, in the sense that, throughout the duration of the ServiceNow implementation, the INRY team is rapidly designing, configuring, testing and deploying individual processes.

Instead of waiting for multiple pieces of the puzzle to be deployed, INRY focuses on adding value from project start to project finish, by ensuring individual processes are deployed and tested before the official ‘Go-Live’ date. This approach and methodology ensure that the Client is implementing a ServiceNow product that they are familiar with and is tailored to meet their business needs and objectives.

INRY is constantly looking at organizational change models that are being used in different organizations across many different industries. When PASS first came to fruition, there were several different OCM models that were used as guidelines to ensure that with every project, INRY was also accounting for the change management that needed to be completed for the projects to truly be successful. One of the models was Kotter’s method, which targeted speaking to people’s feelings. The method is revolving around the central idea that individual behaviors of the employees need to be changed so that a successful change can be made. Part of this method is also getting employees involved at an early state to create a guiding team to help ease the change throughout the organization.

At INRY, project teams are engaged from one of the first few steps of the PASS process to ensure that they extended teams that will be impacted by the change are aware and knowledgeable about what the change is.

Furthermore, INRY’s PASS methodology establishes a transition where parts of the project are delivered individually. This allows for individuals to use the product for a specific process before the entire project is completed. This transition from point A to point B, encompasses the Bridge’s transition model . This specific model believes that a change is a transition over a period, rather than a sudden change. This transition will allow individuals to let go of the past processes and way of work and allow for these new changes to change the way they work and function on a day-to-day basis.

In the figure below, each of the five states are represented across the different states of change. It is depicted in the different states of change as a guiding principal when for when your organization is going through a change, because no change is the same! Also, this model is intended to be adopted by everyone within the organization, because a successful change needs to be embraced on a personal level, rather than a high-level, organizational level.

INRY believes that by fusing some traditional OCM models together and then put into PASS, we are creating more successful projects both in the short term and long term. 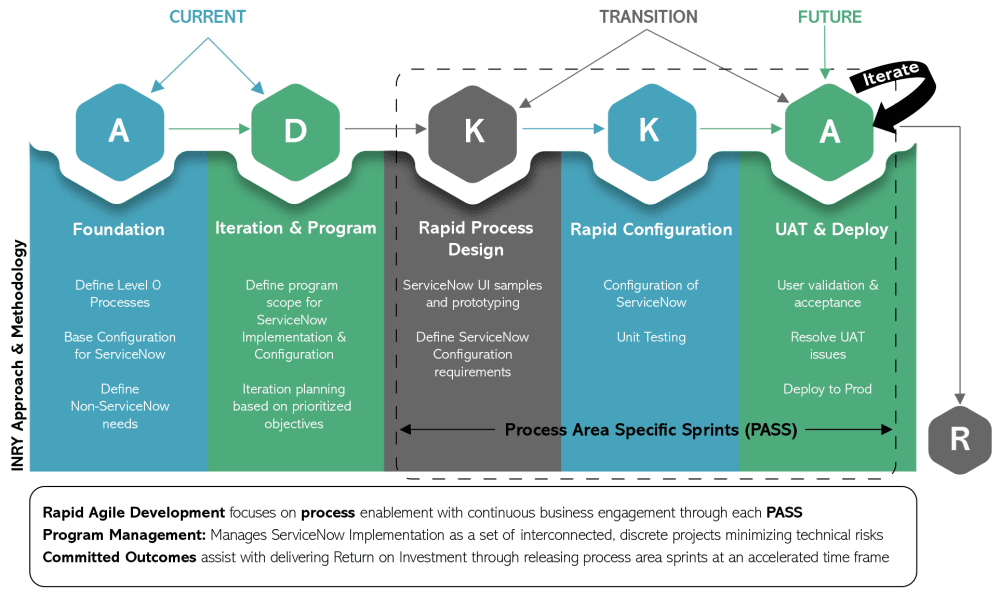 INRY intends to define real business needs and create that awareness of what the foundational level issues are within your organization. INRY wants to understand what is causing attrition within the organization and bring awareness to that. From there, the message should be relayed to extended teams.

The desire is the recognition and want for a change to occur. Desire should be spread across each individual who will be impacted by the change. Many of the organizational change models depict that change must stem from a personal level to truly have a successful change across the organization. From PASS, our Iteration and Program Planning phase is where the extended project teams come into the conversation and allow us to ignite that desire.

We perform kickoff meetings with the extended project team, which gets people very excited about what’s to come. Without desire, changes will likely not stick, due to people resorting back to their old ways of work because they do not think the change is valuable enough to them.

INRY performs workshops with every client to gather requirements for the implementation, but a big part of the workshops is to truly outline what the product is and how it works from many different points of views. In Rapid Process Design, we are defining what their standard processes are and what it will look like for the employees sitting in the room.

A = Ability + UAT and Deploy

To have knowledge about something is one thing, but to be able to use it is another. This is where ability comes into play. The ability to use the product that was implemented and what will be used daily for employees is necessary for success.

INRY uses UAT testing to allow employees to get hands-on with the product and allow for them to practice the different tasks and functions they will be executing as a part of their regular workday. Typically, the INRY team is onsite with the customer for UAT so the INRY team can answer questions and do a demonstration of the product to the employees to see what it looks like. The importance of practicing and doing this stuff firsthand will only allow for an easier change that is adopted by the organization.

The future state is something that should be thought about from the beginning of the change, but it is significant to reinforce the change after the product has been implemented. INRY has building blocks in which the PASS methodology and approach is built upon that reinforce the success of the project.

One of the building blocks is carrying out a process similar to rapid agile development. By churning out whole processes one by one instead of the entire finished product all at once, it allows for a smoother transition and for the employees to get familiar with the product at a rate that is more consumable.

The second building block is program management. Being proactive about potential risks and issues throughout the project will result in an accurate timeline, budget, and scope, as well as happier employees. The last building block is committed outcomes. INRY is committed to the success of the client at every step of the project. INRY understands that change can be challenging and a substantial task for an organization to carry out, so we are committed to your success.

Organization change management is not easy. “Over 70% of organizational change initiatives fail but change itself isn’t the stumbling block. Change is common and natural, even inevitable. Seasons change, people change, mountain ranges change – yet successful change management remains a lofty, even insurmountable challenge for many organizations.” (Dickson, 2019) INRY has recognized that OCM is one of the biggest hurdles that organizations need help getting over.

With our PASS methodology and approach, we made certain that organizational change management was thought about and incorporated into the process. Your success is our success and INRY is committed to delivering projects that will remain prominent in your organization.